Ryan Hansford and the Multispares Torana head to Melbourne’s Sandown Raceway next weekend for round 5 of the 2017 Touring Car Masters series.

Round 4 was held at Queensland Raceway in late July with Ryan finishing the weekend in an epic battle for a race win with Eddie Abelnica in a round that produced some of the best close racing so far this season.

Like Queensland Raceway, Sandown should provide terrific racing with the Ford Falcon of Abelnica and the Mustang of Steve Johnson having the legs down the straights but the Torana’s of Hansford, Bowe and Gomersell having the handling and brakes to hang on. Throw the Camaro of series leader Adam Bressington, a handful of Monaro’s and the battle will again be intense.

Bressington and Bowe are tied 529 points with Steve Johnson on 512, Ryan on 482 and Jason Gomersall on 461. With Sandown, Bathurst and Newcastle still to run the championship is wide open.
“The team and I made a big step forward during the QR weekend” said Hansford.

“I hadn’t been feeling confident with the brakes all season. We have been trying different rotors, pads and even different brake fluid. The Multispares Torana has different brand brake calipers front and rear so it really has been trial and error all season. Thanks to some advice from several competitors, we tried something in race 3 at QR and, well everyone saw the result.” Hansford added.

“I have always liked Sandown and once again I think that I should be right with JB and Steve. I’m sure Abelnica will be fast and Jason Gomersall has been at the front all season.” Said Ryan.
A stand-alone TCM pit / paddock area will see the field located at the Southern end of the main grandstand at Sandown, just adjacent to turn one.

Located in the General Admission areas of the venue, it means all fans at the event will be able to mingle with the stars of the TCM series and at the same time get an up close and personal look at the machinery that makes up the grid.

The initiative has been several months in the planning stages and could not have happened without the support of the Virgin Australia Supercars Championship and the Sandown 500 event organisers.
The new paddock layout will see cars enter and exit the circuit from the access road next to the main grandstand, on drivers’ right just prior to the braking zone for turn one. 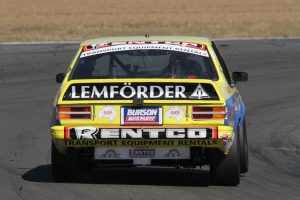